Three years after releasing the popular Book of Dead slot in 2016, Play’n GO decided to come up with an even more exciting follow-up – Rise of Dead slot. The game has five reels, twenty paylines, and it’s playable on desktop and all mobile devices. It’s also loaded with bonus features and caters to both low and high-rollers with a minimum bet of £0.20 and a maximum bet of £100. 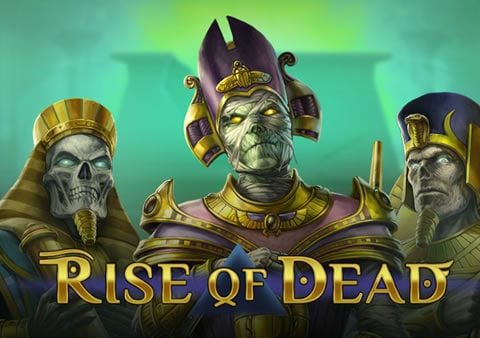 If you’re familiar with Play’n GO, you know that they always deliver high-quality slots with impeccable graphics and sound effects, and Rise of Dead is certainly not an exception. The reels are set on a dark background between two pillars covered in hieroglyphics and authentic Egyptian sounds in the background tie it all together. Game symbols include A, K, Q, J, and 10 card symbols, three pharaohs, a wild symbol represented by a scarab beetle and a scroll scatter.

A Mega Stacks feature is triggered on each spin, and with that, a randomly selected symbol fills twelve consecutive positions on each reel to help you land bigger wins. The Gift of Gods feature fills three reels with a Mega Stack symbol and pays up to 500x your stake. Three scatter symbols on reel one, three and four trigger the Ancient Free Spins feature, and award ten re-triggerable spins.

Rise of Dead is an interesting sequel slot with an RTP rate of 96.53% that offers a wide range of bonus features and an overall enjoyable gaming experience. Decent payouts from regular symbols, bigger ones from special symbols, and three exciting bonus features await you in this game. Since Rise of Dead is a high-volatility slot, you can expect infrequent but, significant wins and hope for the maximum prize of 5000x your stake.